Shrimps in my tank

Clea Helena (assasin snail) - There should be enough snails in the tank to keep them busy otherwise they tend to scavenge for food. Eat all the food that is on their way. 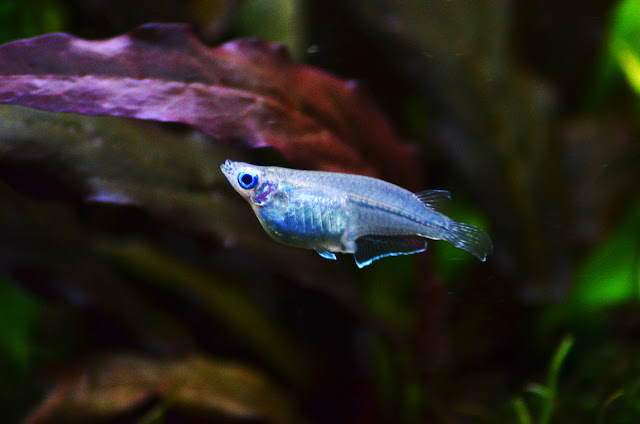 Oryazis Dancena - She was wild caught blue eyed beauty and was in my 4 foot tank for almost 1 and a half years.
She succumbed to a major injury and was counting her last few minutes. She was struggling to keep herself up and that is when these predators came into act. 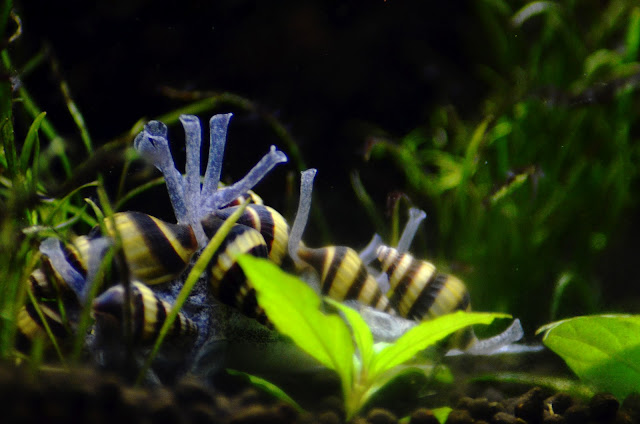 The first five or six predator's suffocated her to death and within few minutes there were lots of them feeding on her. 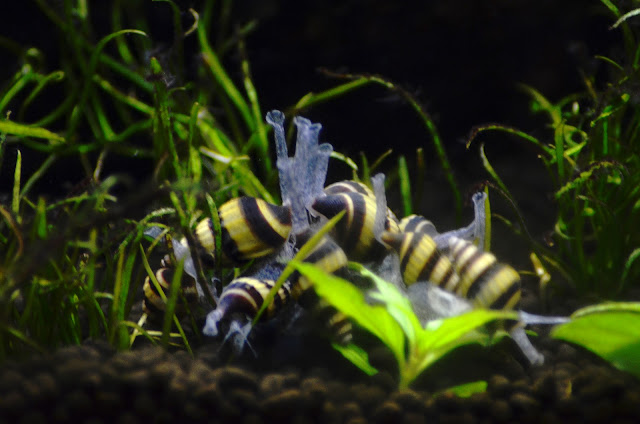 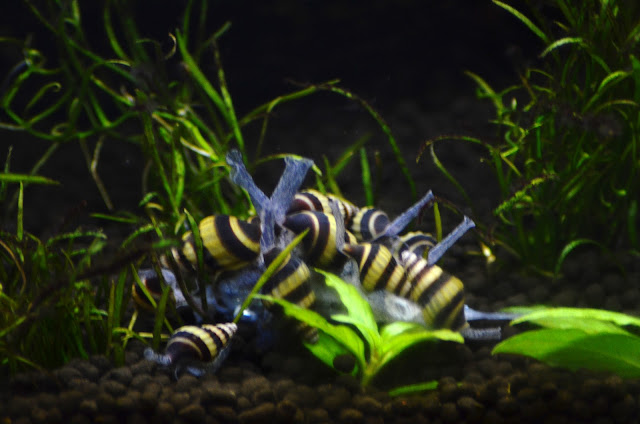 It took just 2 hours of time for them to finish of her completely. Although they seem brutal, without them she would've died in some crevice unnoticed and increased the nitrate level in the water which would be fatal for all the other inmates in the tank.

They bring the balance in the aquarium by scavenging the dead/paralyzed ones.
Posted by Sathish S at 09:32 No comments:

It all started with accidentally seeing the pictures of Yakushima, Kagushima, Japan while browsing an aquarium related forum and one picture caught my attention. Planned to give a try (The link for that picture is a secret. Clue is that it’s more of a hard setup)

There are lots and lots of good places in India, where we can try some aquascape out of it. That specific picture impressed me. I’ve been to lot of places across India, specifically a lot across Southern India during my college days I had no idea of how a planted aquarium would be at that time. These days am spending lot of my free time with aquascaping and plants but not in a position to go on a vacation at this point.

Ok then decided to try this scape. Next step how big the tank’s going to be? Already have a 4 feeter and a 2 feeter, so decided myself to get on with a nano tank. Bought an ocean free brands 12 inch cube. Remaining items for the plan to be executed Rocks, woods, light, filter, flora’s and fauna’s. 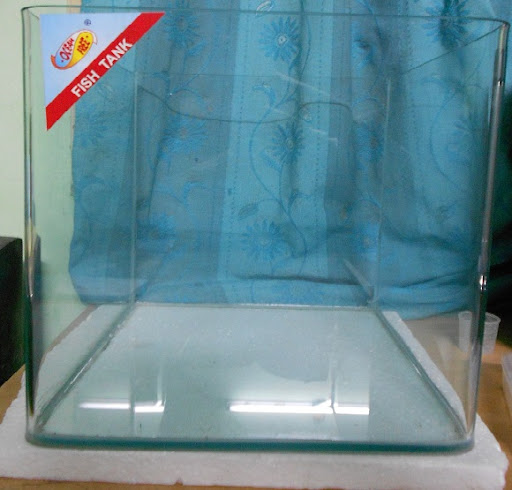 The forest in the picture had a low light, So no need to spend a lot for lighting (Relieved!) medium low LED lighting would be enough, but the choice of plants for the setup should not be demanding (Yeah ok noted!). For the plants I’ve decided to get on with Weeping moss, mini bolibitis, fissidens fontanus and anubias petite. Might use flame moss. Flame moss demands more light to grow lush but on low light this would be scattered and a lot thinner (that is exactly what I want!)

Rocks and woods: Small sized pebbles; small to medium sized rocks is my choice of stones for the set up and few trees like wood to be fit into the cube. On a general lunch time discussion, a friend of mine (who lives in Chengalpet which is near to my city Chennai) gave an idea to give a shot near “Palar River” near his home (My mind like one of the meme in 9Gag: go there and “Get all the stones”, “Catch all the fishes”, “Get all the plants” LOL). The moment he said that, I’ve planned that I’ll be going there coming weekend.

At last weekend came (anxiously waited for that to come) and I started early morning because my friend’s place is around 50Km and will take more than an hour’s journey from my place. Although it was the first time to his house, I was so excited that I could not sit and spend time there, urged him to get ready and he said there was a shortcut to the river from his house. So we started walking that way, reached the river almost but couldn’t get there because of the swamps (not sure of the depth) in between due to recent monsoon rain here. So returned back and took the normal route and reached the destination J 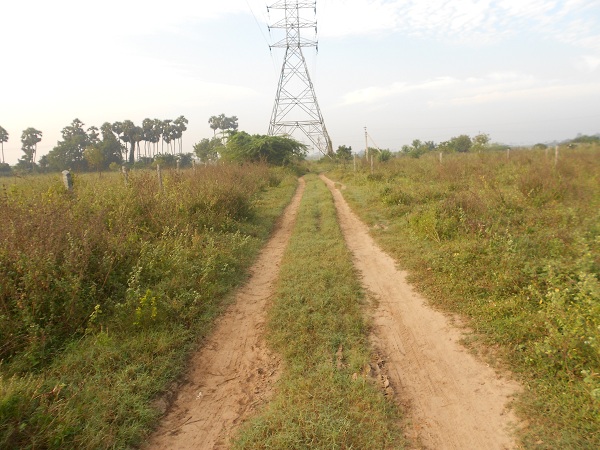 The way we walked and ended up returning because of the swamps. 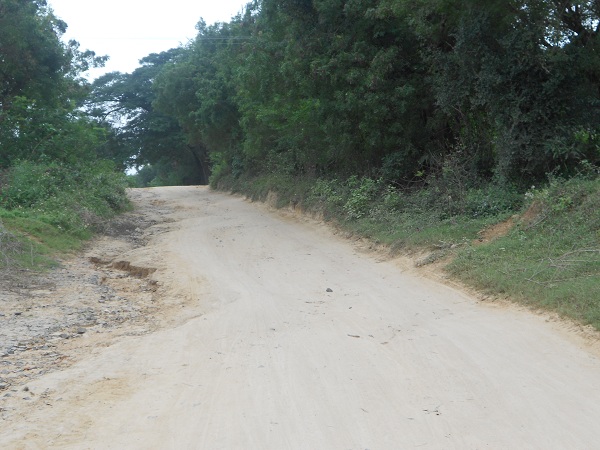 Took this route to reach the river
Little information about Palar River: She runs across three states in India and major part in Tamilnadu (Where I live) before ending her journey in Bay of Bengal. There is one dam constructed across this river, hence there’s not too much flow. Only a knee high small stream flowing across (Ideal for the hunt!) even after good monsoon rain and the rest of the river was like a desert. 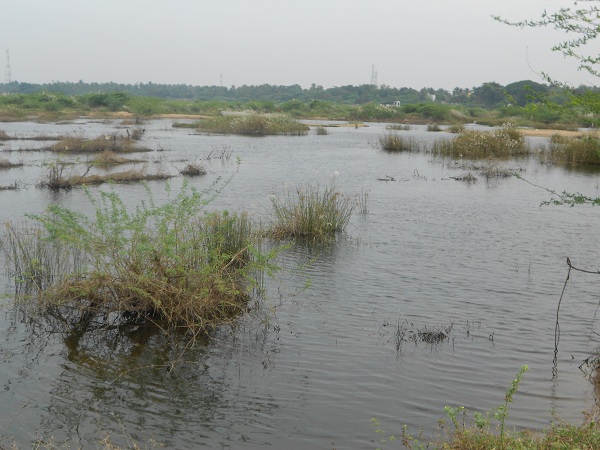 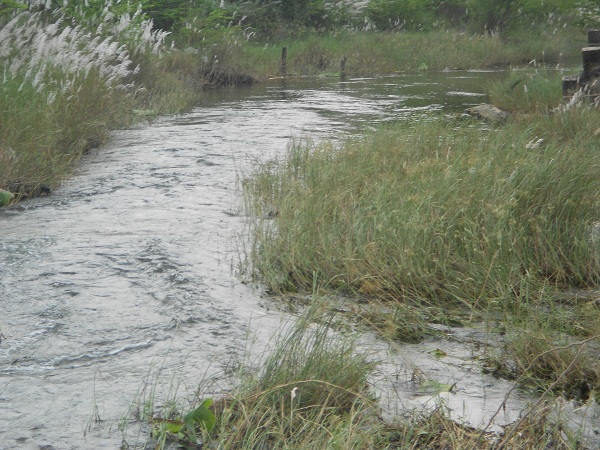 As soon as I reached there, I Jumped into the stream, caught a fish at the first sight with the accessories I had and it was “badis badis” blue shade (awesome!! What next), then there were some loaches and few other fishes and crabs (not interested in them). Searched for some shrimps none were found! 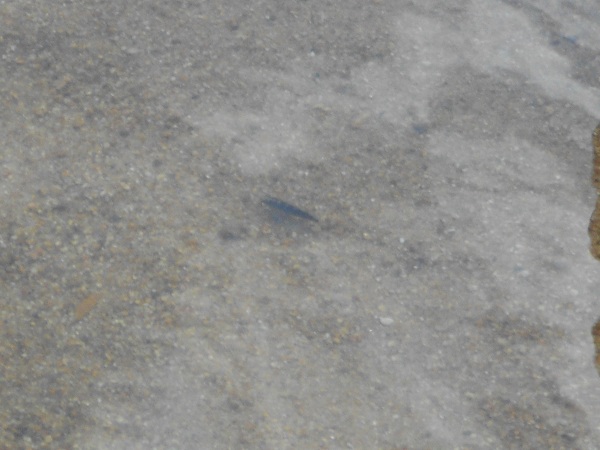 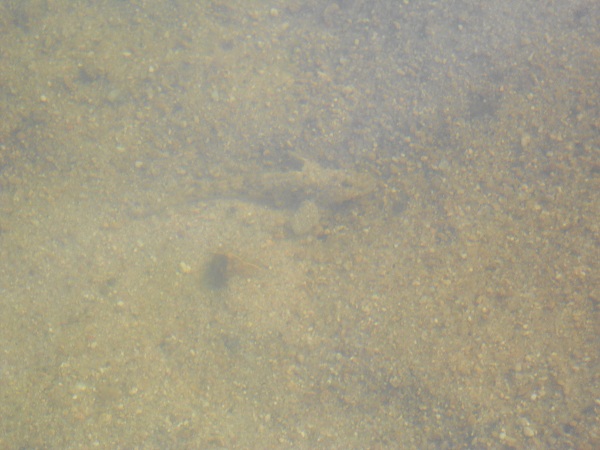 Suddenly there was lot of stagnant water peeked into it and saw few earth eater cichlids. 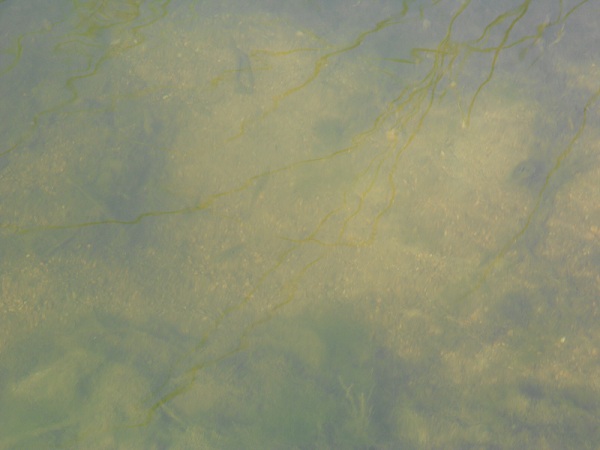 This is where I saw the earth eater find one if you can!

Me: No! No! We already have two tanks not enough space in the room for another big one.

Other self: Isn’t it a long term plan for us my love, to setup one like this and we have all the required resources here.

Me: Yeah true, but right now our plan is different isn’t (Voice of my friend from a long distance “dude! come here I can see some small black stones that you were looking for!”) Realized that I accompanied a friend and went towards that part of the stream and got few stones (Only a few!) even after searching a lot in the stream. 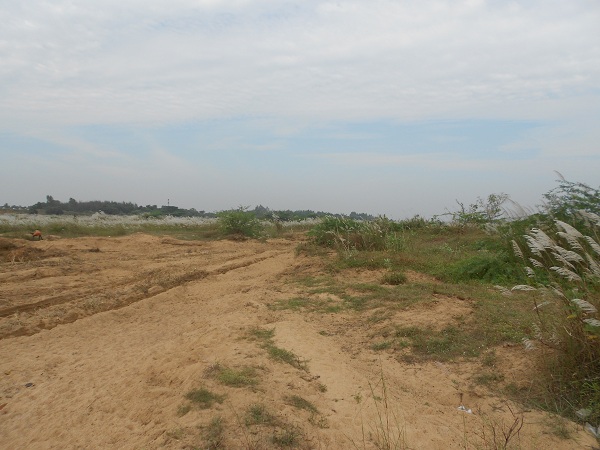 This place was once the mainstream of the river 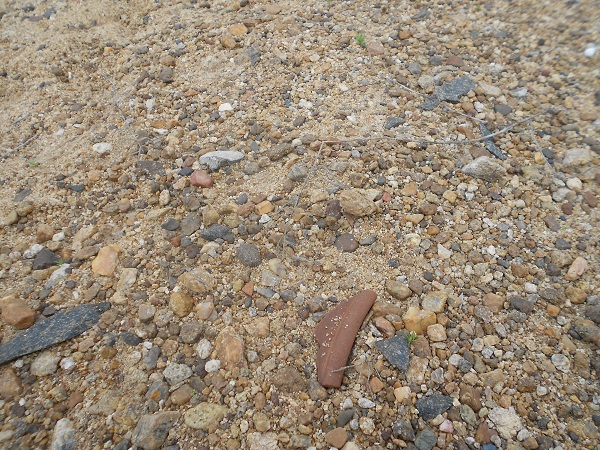 Collected lot of small black pebbles and rocks from this place 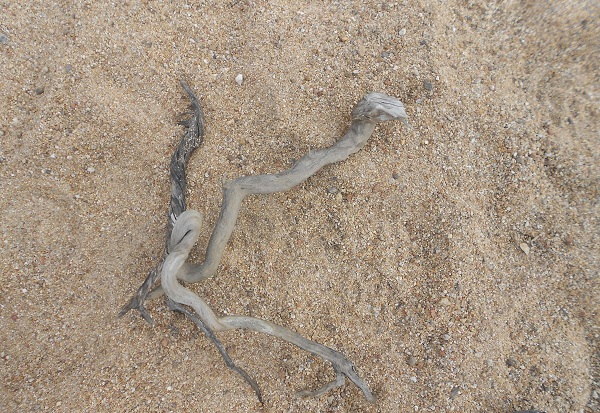 This is the wood I was gifted with

My friend advised me to continue the search on the other side of the stream went there but couldn’t find a better place to continue the search. Walked in to the dry middle part of the river to take some picture and saw lot of pebbles and stones (Surprise!! “Get all the stones”) went on a collection spree got more than enough stones and couple of good looking woods. It was more than 4 hours there’s got to be a end there, so planned to wind up and there was the only “badis badis” in the captive, and no company for him “Release all the fishes” my mind said . So as the last move released the only fish and angry other self who was confusing my mind for the earth eater biotope setup!

Came back to friend’s place, his mom provided a wonderful brunch! Spent time viewing the plants in the backyard garden. Since, the place is very near to river, the soil is so fertile and plants are growing too good. Good bye time, on the way back saw a mountain stretch which had good source of laterite (Marked!) and one River Adyar (Good flow because of the monsoon rain) (Marked again!!). Ended the trip on a satisfactory note and got enough resources to initiate the setup! 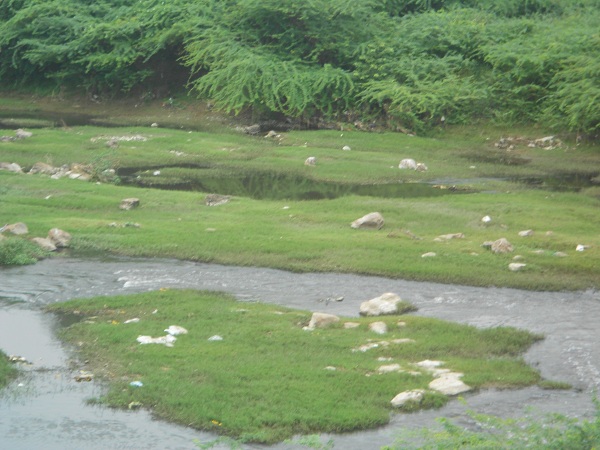 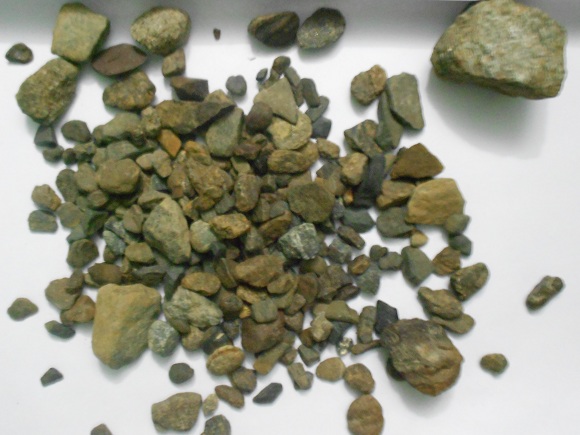 To be continued with the progress of the forest....